How does Google get involved in the 2012 London Olympics? By making it WAY easier to get information on how your favorite teams are doing! But Google has taken it to a whole new level this year—instead of just sending you to the website with the right information, Google lists everything you need to know right on their homepage.

Google and the Olympic Countries

Is there a certain country you’re rooting for? Type in “[country] olympics” and you’ll see something similar to the images below. The number of gold, silver and bronze medals they’ve won, which sports have been their best and a schedule of when they’ll be playing next, in your time zone—Google has you covered when it comes to information on the 2012 Olympics. Google and the Olympic Sports

Maybe instead of wanting information organized by country, you have a favorite sport in the Olympics that you want to keep track of. Google has you covered there as well! Type in “[sport] Olympics” and voila—you get the images below! Learn which countries are leading the way in that particular sport, and find out when the next competition is. 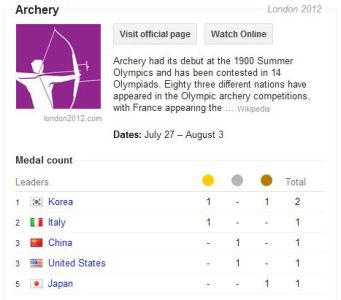 Google was very smart this year, and their knowledge graph is growing by leaps and bounds. Google is moving farther away from directing searchers to external websites, and starting to keep more people on their search engine result pages.

Google Doodles and the Olympics

Other than getting searchers information about the Olympics, Google also has fun with doodles for each of the sports. So far, they’ve had doodles for the opening ceremonies, archery, diving and fencing! For as long as the Olympics are going, there’s sure to be another doodle on the Google homepage. [click to see the images larger!] Everyone wants a hand in the Olympics, and Google is doing a great job of keeping them covered! Another search engine that has had some Olympic-themed images is Bing—we assume that they’ll have more fun images as the London 2012 Olympics continue!